This website provides access to New Zealand sea lion pup production estimates based on data collected at breeding sites on the Auckland Islands. 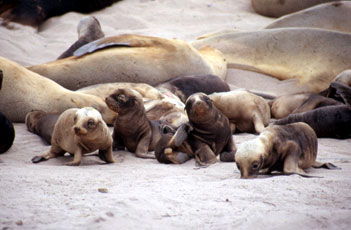 Researchers from Conservation Services Programme at Department of Conservation have been carry out annual estimates of the total pup production from the breeding sites in the Auckland Islands. Where it is practical direct counts of both live and dead sea lions pups are made and where that is not possible a estimation technique called mark recapture is used.

This website summarises the results of these pup production estimates and makes the raw observational data available for download. The data are made available under a creative commons attribution licence.

There is a separate site for New Zealand sea lion tagging and resighting data.